An Exercise in Understanding the Quran 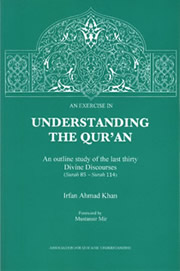 An outline study of the last 30 surahs of the Holy Quran.  Based on half a century’s study and reflections, the author develops – in line with recent trends in Qur’anic exegesis – a new method for Qur’anic understanding, and combines with it the result of his inquiries in thematic structure of the Qur’anic surahs. It is this combination that the uniqueness of the book lies in.

This book is available online and at many Islamic bookstores. Price: $16.95

Reviews:
“This recent addition to the field of the Qur’anic studies attempts a new method of linear translation with penetrating exploration of the thematic structures to make the Qur’an accessible to non-Arabic speakers.

The last 30 chapters of the Qur’an are probably the most read part of any revealed book in the human history and the author has done a very valuable service in selected this section for its brevity and forceful presentation of Islam.

The Qur’an is the “guidance” from God to the entire humanity and has been revealed for all to ponder upon its contents. It is also a book that profoundly impacted the geo- political spectrum of the globe for the last fifteen centuries. For 1/5th of the humanity it is the foremost source of knowledge and a practical guide. It molded the Muslim perception of the world and man’s position in the universe. The need for understanding the Quran cannot be overemphasized and the daily prayers provide a perfect opportunity to listen to God’s words.

The Quran is memorized by more than a billion Muslims. They recite the original Arabic texts from memory five times a day in their daily prayers. Unfortunately, it is often recited or taught in the Qur’anic learning schools without much effort to understanding the content or the intricacies of its message.

The writer has made it easier for the readers to keep the wider view of the subject under discussion by giving a brief summary of the contents first and then connect the text with its original meaning before adding explanations.

Dr. Khan’s dedication to the understanding the contents of the Qur’an is reflected in his earlier attempts as well. His weekly Tafseer lessons were eagerly attended by groups of dedicated listeners and his Reflection on the Qur’an (2005) was enthusiastically received. The writer asks the readers not to stop at the translation. They must continue on their own journey in reflection if they wish to understand the Qur’an better.

A few Arabic terms like Suwar (pl of Surah) might puzzle some and at times he might appear stretching the string of his ideas, and yet it is a book worthy of popular appreciation.

A nice attractive cover, and easy to read Arabic and English fonts make it a perfect gift for your grown up kids, as well as non-Muslim acquaintances. Non-Arabic speakers, obviously, have to make extra efforts to learn Arabic to understand Quran. Highly recommended.”
(Review by Omar Afzal, PhD, Cornell University, USA).

“Here is a book that does not inspire awe by its scholarly erudition. Instead of asking the reader to follow the footprints of the author, this is what most tafsirs try the reader to convince, this book becomes unique in the sense that it discourages the reader to be spoon-fed. On the contrary, it warns against following the approach of an existing tafsir:
“… And remember: God will not appreciate if other people’s understanding of the Divine Text is, all the time, standing between you and the Divine Speech (Kalam Allah) which God wants you to listen with your own ears and understand with your own aql” (p. 3). [aql = brain]

This does not mean that he dismisses the vast heritage of tafsirs penned by eminent scholars. He simply reminds that one must arrive at one’s own conclusions though fully informed by earlier tafsirs. In the Salah, there is a communication in which the devotee is the speaker and Allah the listener with no one in between to interpret (and intervene); so must be in the recitation of Qur’an in which God is the speaker and devotee the learner. Why should there be an intermediary, he argues.

Then what is the justification for this book? It enables the initiator, step-by-step, how to approach the Divine Text. He takes the beginner from scratch. He starts guiding him from the smallest “meaningful” unit of the Qur’an, i.e., ayah. What to look for in an ayah and what constitutes the “ayah-consciousness?” Once the reader develops this, he is advised to understand the structure of each Surah which is not just a bundle of scattered ideas. Every Surah has its own unique style of elaborating its central theme. (p. 4). Through repeated reading, the reader would discern, how various themes of the Surah are united through… invisible thread (p. 5). Understanding a Surah involves developing an insight into the Surah as a whole and only those who fully comprehend the thematic structure of a Surah, understand the Surah. (p. 5).

Does Khan leave the reader in dark and keep him groping for meaning? Very often people suggest the best way of teaching how to swim is to push the person into the pond and watch him how does he manage the crisis. No, Khan on the contrary, takes 30 Suwar (plural of Surah) and one-by-one shows the structure, the theme and the uniting thread in the last (85-114) Surahs. He divides each Surah into three distinct parts and then enables the learner to arrive at his own comprehension. In literary criticism such practice was called deconstruction. This is what the book does. It deconstructs the last 30 surahs to enable the learner to practice the art. Once the learner develops self-confidence, he does not need a guide or a trainer. This is what each swimmer does when he discards the swim-suit.

An uninitiated reader wonders why there are so much swearing (qasam) in various suwar. In some it is in the beginning and then there is frequent repetition. In a few cases the swearing comes in the middle of the surah. Reader keeps wondering why this linguistic strategy is so frequently followed. Other commentators have merely translated and explained this in a few footnotes. Khan devotes chapter 2 to this very device – qasam in the Qur’an in the light of the 30 surahs. He first enlightens “The swearing in the Qur’an prepares the minds of the readers for a better understanding of the point the Qur’an underlines.” (p. 21).

The significance of qasam is explained by analysing the suwar and how qasam enables the reader to develop the insight. As a poor analogy, I would venture to suggest that like a traffic signal which forewarns a driver; the qasam prepares the reader to be cautious and alert while reading the next ayah.

In chapter 3, Khan throws light on certain terms and concepts and enables the reader to develop a subtle distinction between various ‘similar’ expressions, e.g. fasad and fitnah or yatim and miskin, insan and nas.

Quite often the faithfuls and mostly non-believers have wondered why did the Qur’an not retain the sequence of suwar (surahs) – the chronological order of revelation, i.e. why the sequence has been changed? Western translators, in fact, tried to revert to the chronological order in which the suwar were revealed. Khan answers the query quite convincingly: ‘Only when some humans have responded positively to the Qur’anic call and thereby a believing community has come into existence, it would be a right time for sending down (tanzil) of the surahs like al-Baqarah, Aal Imran, an-Nisa and al-Maidah. … this consideration was actually part of the Divine Policy concerning the chronology of revelation to the Prophet. Historically, Surah al-Anam, and Surah al-A’raf as well as other Makkan suwar were revealed to the Prophet before al-Baqarah, Aal Imran, an-Nisa, al-Maidah, and other Madani suwar. However, now when a Qur’anic community is already in existence, the Divine wisdom demands that this community of the believers should be educated through the above four courses of study, before it comes to the human world to do its assignment under the guidance of al-An’am and al-A’raf.’ (p. 17).

From page 53 to 200, the 30 suwar (85-114) have been covered. Each ayah in Arabic text is explained through an English translation. Each Surah begins with an “Outline Structure” followed by “An understanding and Interpretation”. The last 12 pages present an “Overall Look”: system underlying the Qur’anic Surahs 85-114. This explains the question why did Khan prefer these suwar.

Irfan Ahmad Khan, born in India in 1931, is a science graduate of AMU and studied Qur’an and classical Arabic at Rampur. After his MA in philosophy (1958), he taught Western Philosophy, Indian religions and Muslim theology (1958-1973). In early sixties he edited Islamic Thought. In 1974 he moved to USA for PhD at University of Illinois, Chicago. A founding trustee of the Parliament of World’s Religions and International Committee for the Peace Council and the Founding President for World Council of Muslims of Interfaith Relations and Interfaith Engagement Project, he is at present the Director of the Association for Qur’anic Understanding.

With such illustrious career and exposure to Islamic studies he is a competent authority to author a book which none should miss to read. I must recommend the book to everyone who wants to have first hand understanding of the Qur’an without any intermediary. May Allah bless Khan for such illustrious a pursuit. Amen!”
(Review by AG Khan, The Milli Gazette, India)

This entry was posted in Books. Bookmark the permalink.